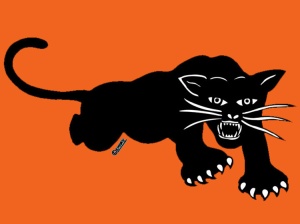 Of course they were SCARY.

They were a living nightmare, to haunt
white racist supremacists everywhere.

And a revolutionary cause for celebration
for everyone else.

Founded in late October of 1966 they were
the Black Panther Party for Self-Defense.
All Power to the People!

4 Corners: An interview with Emory Douglas

As a black teenager growing up in East Sheen, I was inspired by the historical contribution of the Black Power and Civil Rights Movement in the US, and influenced by leading black political figures and community activists such as Malcolm X and Martin Luther King; Stokely Carmichael and H. Rap Brown; Huey Newton and Bobby Seale – and the Black Panther Party for Self-Defense in particular. The Black Panthers’ base in Oakland, California was a universe away from the genteel, suburban niceties of south west London, but as an aspiring artist and designer I could not help but be captivated by the powerful and evocative imagery they projected and the striking graphic designs they created. Both the medium and the message had a profound influence on my development as a creative professional and certainly instilled a desire to use design as a tool to promote and tackle social issues and human rights issues that continues to this day. The Black Panthers’ pioneering political visual communications were the handiwork of a truly gifted and visionary man, who served the party as Minister for Culture from 1967 to 1980. A man who in my wildest dreams I could never have imagined that I would one day have the honour of interviewing and the pleasure of introducing you to today. Brothers and Sisters please pump your black, gloved fists up for Mr Emory Douglas.

Emory Douglas, Revolutionary Artist, Designer and Minister of Culture of The Black Panther Party for Self-Defense (1967-80).

My art background is basically as a self-taught artist with a minimum of professional training. I attended City College in San Francisco off and on from around 1964 to 1966 and majored in Commercial Art. That educational practice introduced me to the basic graphic designing elements such as figure drawing, sketching, illustration drawing, lettering, layout and design, pre-press production, the offset printing process, the basic animation process and how to critique and evaluate one’s work. This was my only academic graphic design training prior to my actual on-the-job training.

How did you get started in your field of expertise?

As a youth I was in and out of detention centers, I will say for illegal activity not sanctioned by the state. While there I would do mostly landscape art – nothing with any social meaning. A year or so after I got out I decided to attend City College of San Francisco. The councillor at the detention center heard of my decision to attend college and suggested I take up art. When I went to enroll I mentioned to the college councillor I would like to major in Art and he suggested I major in the Commercial Arts, which I did. Thereafter the whole idea of my going to school was to try and break into commercial art by becoming a designer, art director or illustrator. I heard of people who were making good money in those fields so I wanted to join them. However,  after a while I began to see and realise that there was really only an elite few that made it and became successful and they were mostly the white students, particularly the ones who had relatives or close family friends with ties to the commercial art field. While at college I developed my graphic art skills to a professional level, where they would send me out on job assignments. I worked at a silk-screen factory where I learned the silk-screen printing process. I also worked at a downtown store in San Francisco where they sold fine wine goblets and silverware doing layout, cutting and pasting of advertisements and preparing display signs for their store window displays. Also there were paying jobs that came in from various departments at the College for graphic design work such as sign lettering and technical illustrations where I along with other art students who had developed our skills to a basic professional level were offered these jobs.

What challenges did you face in achieving your ambitions to break into the industry?

Certainly there were challenges, because this was at the height of the Civil Rights movement. Firms weren’t hiring blacks, so it was particularly difficult for African- Americans and there were many racial biases and obstacles to overcome. But at the same time that’s how I got involved in political artwork. For example, the whole time I attended City College there was only me and sometimes one other black person who were enrolled in the Commercial Art classes of about 20 students per class. Also there were graphic styles that I created which one of the instructors expressed to me wasn’t commercial enough, so for a while I had to go along with that whole framework of how they programme you to produce artwork for your portfolio with a certain commercial style that was considered acceptable when it came time to looking for a job or going for job interviews. The graphic styles I personally used I had to just put that to the side until later on. I remember one time as a class assignment to create a magazine layout I created one similar to EBONY magazine (the most prominent African-American magazine of the time) and the teacher pulled me aside and said how much he appreciated what I had done. But he added that to be honest with me, it would be another 10 years or so before ideas like mine would be accepted. Eventually it was the Civil Rights, and human rights pressures and campaigning against discrimination that began the process for black people getting into the commercial arts industry during that period.

Who and what are your greatest inspirations?

As a youngster growing up it was my mother – she was legally blind and worked hard as a single parent.  There was an artist I knew named Charles Bible, he lived downstairs from where I lived and he would mass-produce multiple paintings of the same image of Malcolm X every year for the anniversary celebrations of Malcolm’s life. I would talk to him about his assembly-line production process and his painting technique and he would explain both of them to me. The information he shared became very helpful when I began doing some portrait paintings over the years. There was also the Black Arts Movement (BAM), which I made artistic contributions to during and prior to my joining The Black Panther Party in late January 1967. Then there was this calendar I would see as a child at my aunt’s house. Every year it featured artwork by a black artist named Charles White, which had a real impact on me. Politically, I was inspired by the politics and artwork that was being created at the time – particularly the work of the Cuban poster artists of OSPAAL (Organization of Solidarity with the People of Asia, Africa and Latin America), and from China, Vietnam, the Anti-War movement and Palestine. The Cuban artists used to remix some of my artwork they saw in the Black Panther Newspaper and created some amazing solidarity posters that they would share around the world – that was very exciting and inspiring.

What is the project you are most proud of?

I would say the best piece of work would have to be a volume of work that maybe tells a story – and therefore it would be my body of work for The Black Panther Party. But there are also volumes of work that I’m doing today that I feel strongly about and that I am pleased and satisfied to be able to make a statement on current issues and in a more contemporary way than what I did back then.

What would be your dream project?

If I were younger, my dream job would probably as the head of a company, art department or organisation dealing with basic human rights and enlightening and educating people and using art as a language to communicate with people.

Who in your field do you believe deserve credit or recognition?

There are many, therefore I prefer not to drop names because I’m sure to remember later that I forgot to mention many others I should have, who are also amazing artists and great communicators through their art.

What’s your best piece of advice for those wanting to follow in your footsteps?

Whatever you do stay focused and practise your craft. And if you’re doing political artwork or social commentary art make sure you know the basic politics of whatever social issues that may concern you. Have fun! Don’t do it because it’s a fad, do it because you believe in it and understand that the creative process will be an ongoing life long journey.

What’s next for you?

To continue doing what I’m doing, creating artwork that deals with quality of life issues, basic human rights violations and concern for the struggles and challenges of oppressed peoples in this world.

Big thanks to Maurice Cherry of Revision Path for his help in facilitating this interview.

‘RETURN OF THE RUDEBOY’ is an original exhibition created and curated by prolific photographer and filmmaker Dean Chalkley and creative director Harris Elliott, which showcases a sartorial subculture through a series of portraits, installations and set pieces. Runs until 25 August 2014 at Somerset House, Terrace Rooms, Strand London WC2R 1LA. Admission FREE. For more information visit www.somersethouse.org.uk.

KERRY JAMES MARSHALL: PAINTING AND OTHER STUFF is an exhibition of the work of the American artist across venues in Madrid and Barcelona. The exhibition is divided between two venues. At the Museo Nacional Centro de Arte Reina Sofía in Madrid there is a focus on historical works and paintings, while the Fundació Antoni Tàpies in Barcelona includes more recent works, not only in painting but also in other media such as drawing, photography, video and installation. Exhbitions run until 26 October 2014. For more information visit www.fundaciotapies.org.

40 VOICES is an exhibition encompassing film, photography and an art installation in celebration of the 40th anniversary of the Culturama event in Nevis Culturama (Nevis ). Through open, emotive and unguarded interviews of forty Nevis residents, 40 Voices aims to create an empowering film that will capture a snapshot of the feelings, opinions and attitudes of Culturama into one seamless loop. The exhibition runs from Sunday 27 July – Sunday 10 August 2014. For more information visit www.culturamanevis.com or chantimedia.com.

DESIGN FOR SOCIAL IMPACT, an exhibition offering a look at how designers, engineers, students, professors, architects and social entrepreneurs use design to solve the problems of the 21st century. The exhibition features projects that address a variety of challenges in the areas of Shelter, Community, Education, Healthcare, Energy and Food & Water. Each category highlights solutions taking place locally, as well as ways in which these challenges are being addressed around the world. The exhibition is on view at Museum of Design Atlanta (MODA) through to 3 August 2014. For more information visit www.museumofdesign.org.

21 ICONS: PORTRAIT OF A NATION, a poignant and inspiring multi-media exhibition by 21 Icons and Mercedes-Benz South Africa, opened on Youth Day, 16 June 2014 at the Museum of African Design in the Maboneng Precinct, Johannesburg. In celebration of 20 Years of democracy, the two-month long exhibition features portraits and short films of 21 of South Africa’s greatest social masters including Nelson Mandela, Desmond Tutu, Sophia Williams De Bruyn, Ahmed Kathrada, Nadine Gordimer and George Bizos. 21 Icons: Portrait of a Nation: Presented by Mercedes-Benz South Africa will be on exhibition at MOAD for the first time, through to 17 August 2014. For more information, please visit www.moadjhb.com/21icons.

If you have any forthcoming events that you would like to be considered for inclusion in this column, please do not hesitate to contact me by email at info at jon-daniel dot com.